The planning function for the Sands estate has formally been returned to the Surf Coast Shire Council (SCSC). The Architectural Review Committee (ARC) has now ceased operation and Wayne Reid the Sands architect who guided the ARC from the beginning should be congratulated for a job well done.

The SCSC has amended the 173 agreement to reflect this change and it has now received ministerial approval. As much of the ARC’s “Building and Environmental Management Code” as possible has been included by SCSC in the amended 173 agreement. The colours, the setbacks etc but as most of the sites in the Sands have now been built on the planning function will mainly be confined to renovations of existing structures. 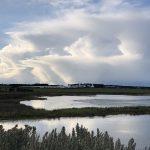 Stormwater not up to scratchGeneral News